Is a boiler for combustion of wet wood biomass and can be produced in the range of 1 to 10 MW.

Is a boiler for combustion of straw bales and can be produced in the range of 2 to 5 MW.

Is a thermal oil boiler for combustion of wet wood biomass and can be produced in the range of 1 to 10 MW.

Is a cylindrical construction boiler with a solid grate designed for combustion of wood biomass, it can be produced in the range of 500 to 1000 kW.

Is a device for increasing the efficiency of boilers burning moist wood. At the same time it can reduce the concentration of dust emissions.

Is a device for reducing the concentration of dust particles in boilers for biomass combustion.

Is a device for reducing the concentration of dust particles in boilers for biomass combustion. It is most commonly used for straw combustion.

In Dříteň, the biomass boiler plant incl. DH system is being modernized

Dříteň is a middle village near the Temelín Nuclear Power Plant, where approximately 1,600 inhabitants live.

In Dříteň, the biomass boiler plant incl. DH system is being modernized

Dříteň is a middle village near the Temelín Nuclear Power Plant, where approximately 1,600 inhabitants live. The central heating system was built there in 2002, when the municipality implemented one of the pilot projects of a central boiler room for burning wood biomass in the Czech Republic in general. Two pieces of boilers manufactured by Imaveco were installed, each with an output of 1000 kW. The project also included partial central heating of the village – laying of pre-insulated pipes with a total length of almost 6 kilometers. In 2009, the district heating was expanded and several dozen houses were connected to the DH system. In 2014, a third boiler for burning wood chips with an output of 1000 kW was installed in the existing boiler room.

Boilers K1 and K2 are more than 15 years old and their service life is coming to an end. The combustion efficiency of all boilers is also lower, and especially the boilers were no longer able to meet the stricter emission limits according to the valid legislation.

Therefore, in 2017, the municipality of Dříteň decided to try to apply for a subsidy for the overall reconstruction of the boiler room, extension of the DH system and installation of home transfer stations. The application was successful after a long time, so the implementation of the project could begin. The project includes the installation of a new biomass boiler for burning moist wood biomass power of 2.5 MW, incl. flue gas cleaning system using an electrostatic precipitator, a comprehensive transition to a pressure-independent system thanks to the installation of approximately 200 modern transfer stations and a partial expansion of the pipe lines network, connecting several buildings (family house and castle). After the implementation of the project, two older boilers will be dismantled, the remaining one power of 1 MW remain as a backup boiler.

The general supplier of the whole project is the Třebíč company TTS eko s.r.o., also known as TTS boilers. Implementation of the project began in the autumn of 2018, and the biomass boiler house itself came next in the last stage, ie from May 2020. Construction modifications of the boiler room and installation of a new boiler will be completed in October 2020, followed by trial operation. With the advent of the heating season, the inhabitants of the village will receive supplies of heat from a new and more ecological source.

The implementation of the entire project in the amount of approximately CZK 38 million will be supported by the Ministry of Industry from the RES (Renewable Energy Sources) program with a subsidy amount of almost 50% of investment costs. 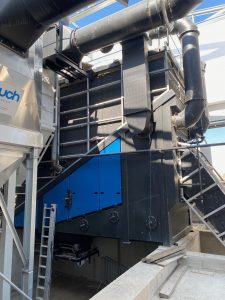